“Judge not the play before the play is done;
Her plot hath many changes; every day
Speaks a new scene; the last act crowns the play.”
Francis Quarles (1592-1644), Epigram: Respice Finem

A home test has just confirmed that Jenny, a successful career woman, is unexpectedly pregnant. Biting the bullet, she decides that tonight is the night to reveal this fact to her husband, Tom. Unfortunately, it seems that Tom has some startling news of his own… 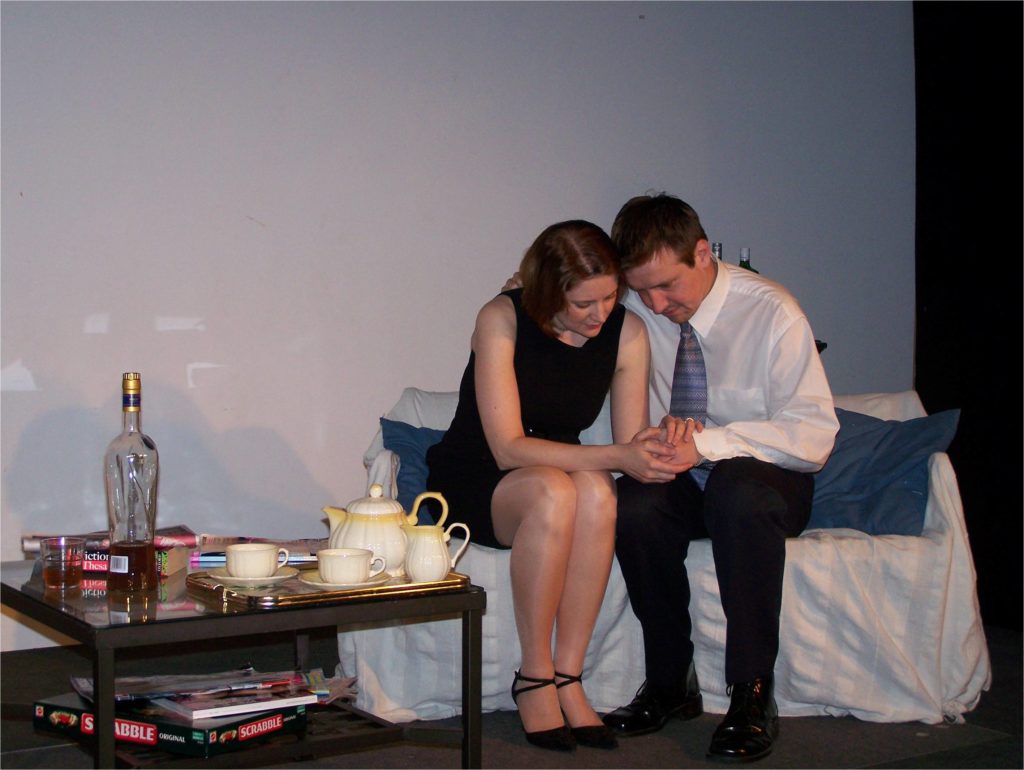 A ‘short but challenging comedy’, Joining the Club was first presented by the Flying Ducks Theatre Company at the Wellington Drama Festival. Directed by David Tristram himself, the play picked up trophies in the ‘Best One Act Play’ and ‘Best Actress – One Act Play’ categories, while David Tristram was also awarded the Adjudicator’s Special Award for Entertainment. 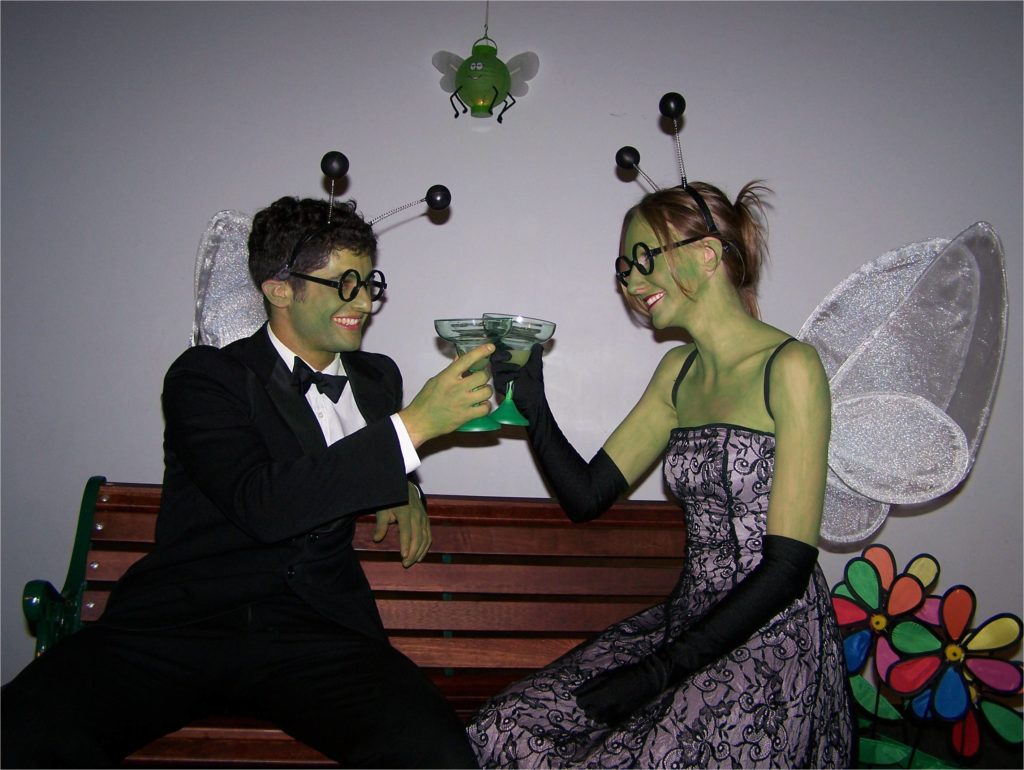 A short play by David Ives
Directed by Emma King-Farlow

“So, these two mayflies are out on a date…” No, not a joke in need of punchline, but the main premise of this original and engaging comedy by American writer David Ives. The phrase ‘carpe diem’ (seize the day) takes on a whole new meaning when, sitting down to watch a nature documentary together, the two love-bugs realise that they have less than twenty-four hours to live!

An award-winning playwright, David Ives is a graduate of the Yale School of Drama and has received the Guggenheim Grant in playwriting. He has been described as ‘a master of language’, who produces ‘magical, eccentric one-act comedy at its very best.’

Victoria Allies  (Jenny, Joining the Club)
Vicky is a member of the Putney Theatre Company and has performed in two recent productions with them, Black Widow and Tartuffe.  Her other credits include Habeas Corpus, Dangerous Corner, The Danube, Footfalls, In Camera and Present Laughter.

Robert Blackwood  (Tom, Joining the Club)
Robert trained under Alan Dunnett at the RSAMD. In the last year he has appeared onstage as Ian in An Evening with Gary Lineker, Don in Bruce Kane’s Caught in the Act, Grumio in The Taming of the Shrew, George in Neil Simon’s Chapter Two and Joey in David Mamet’s The Old Neighbourhood, as well as playing a variety of roles in Ken Lee’s revue show Happy as a Sandbag. At the end of May, Robert appeared in a translation of Sartre’s No Exit at the Baron’s Court Theatre.

All of Robert’s radio work so far has been independent. He has played Brick Back’n’sides (along with other characters) in Brick & Magda’s Radio News Spot, and throughout May and June he broadcast four editions of The Thursday Night Comedy Shop, his self-penned radio comedy show, from the Old Sorting Office in Barnes.

A keen vocalist as well as an actor, Robert sings for a professional gospel choir in Soho and also does session work as a bass – although he is required to employ his tenor range for the gospel choir, he says that he has been trying to limit its use elsewhere in order to preserve his ability to have children at a later date!

Ann Acott  (May, Time Flies)
As a child, Ann was frequently involved in school plays and productions, whether acting, narrating or singing.  These days, she thinks that the singing is best left to others, but her love of acting remains undiminished!

Although opting not to follow the traditional drama school route, Ann has developed her skills through A Level Theatre Studies and classes with various TIE companies, the London Actors Workshop and some experienced solo actors.  She has also very much enjoyed participating in some stage combat workshops.

Ann’s previous acting work, both amateur and professional, includes playing the roles of Deborah in Sexual Perversity in Chicago, Anya in The Cherry Orchard, Joanna in Night of the Soul and Emily in Our Town.  She has also appeared in a number of revues, including We Are Amused with The Actors Richmond Centre, and certain works of devised theatre – The Forgotten Millions and Voices, a recording for the charity Unifem.

Oliver Walters  (Horace, Time Flies)
Born in 1978, Oliver was a keen actor from a very young age, appearing, as a nipper, in a number of Christmas pantomimes in his native Putney.  It was at St Paul’s Boy’s School, however, where his acting career really took off.  He played a variety of well-known roles, including Macleish in The Long and the Short and the Tall, Madama Pace in Six Characters in Search of an Author and Horatio in Rosencrantz and Guildenstern are Dead.  He also appeared as Estragon in Ed Williams’s ambitious bilingual production of Waiting for Godot/En Attendant Godot (the second act was performed in French), which was shown in both Paris and London.

Enthusiastic about working with small, intimate companies, Oliver has appeared at the Edinburgh Fringe in Ever After (written and directed by Nick Harrop and Matt Morrison), and with Westfield Farm Productions as Hound in The Real Inspector Hound.  Having acted with the Barnes Theatre Company in his teens, he returned more recently to work with Ross Livingstone, playing Lennox in Macbeth at the Old Sorting Office in 2005.  In 2006, he played Smike in Keith Perry’s production of Nicholas Nickleby with the Barnes Charity Players and also appeared as the Guide in 100 at the Putney Arts Theatre.

In addition to his theatre work, Oliver has also appeared in a student production of short film Chronos and as a singing Gangster in The Beggar’s Opera at The Lyric, Hammersmith.