“Underneath this little stone lies Robert Earl of Huntington;
No other archer was so good – and people called him Robin Hood.
Such outlaws as he and his men will England never see again.”
Roger Lancelyn Green (1918-1987), The Adventures of Robin Hood

With King Richard the Lionheart absent, corruption and injustice are rife in England. The country cries out for a champion – and in the heart of the forest, a legend stirs…

Throughout June 2016, Shadow Road Productions were delighted to bring a brand new open-air, promenade production of Robin Hood to the WWT London Wetland Centre, one of the UK’s premiere nature reserves and vital conservation charities!

Written by our Artistic Director, Emma King-Farlow, especially for the Centre, this exciting evening out took the audience on a thrilling adventure set against a beautiful outdoor backdrop. From a wedding to a jailbreak, from a woodland fireside to spectacular sword fights, robbery and murder – Robin Hood at the London Wetland Centre had it all! The first event of its kind ever staged at the Wetlands, it was lovely to see so many people there!

Director Emma King-Farlow, actor Fed Zanni (Robin Hood) and other members of the cast did an interview with Wandsworth Radio during the run. (Above)

“Shadow Road Productions is a small professional theatre company based in South-West London. It specialises in presenting new and unfamiliar works in quirky, unusual ways. Its production of Robin Hood at the award-winning nature reserve in Barnes, the London Wetland Centre, demonstrates the company’s modus operandi to perfection. Written and directed by Shadow Road’s Artistic Director, Emma King-Farlow, it’s an alfresco production – the first ever at the London Wetland Centre. Based on the Robin Hood legend, it tells the story of the outlaw’s struggle (with his band of men: Little John, Friar Tuck, Alan-a-Dale, etc.) to assist the people of Loxley in trying to overcome the ruthless reign of terror of the villainous landlord (and Prince John supporter) Guy of Gisborne.

The programme notes describe this production as “immersive”, and it’s certainly that. The audience literally follow the action as it moves from one part of the nature reserve to another. We get a wedding, spectacularly-staged sword fights, romance, death and music and songs, all skilfully staged to make the most of the spectacular outdoor setting. The cast is very talented, and I was particularly taken with Frank Teale’s performance as Gisborne. You really did want to see him get his comeuppance, thanks in no small measure to Teale’s success in portraying the cruelty, ruthlessness and sheer savagery of the character. A brilliant performance!

Robin Hood is family entertainment at its best. There’s something for everyone. The four people I went with (two adults and two young children) all thoroughly enjoyed it. I did too. On this evidence, Shadow Road Productions is a company with a very bright future.” 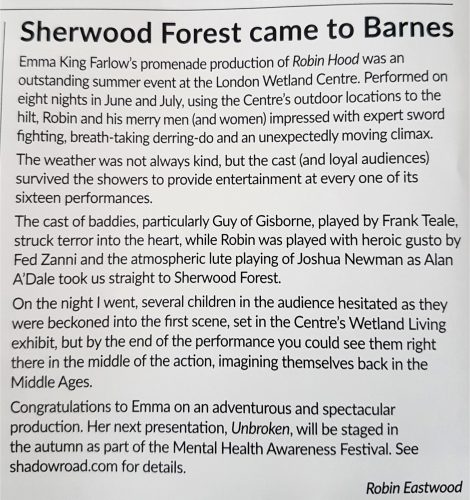 Finally, we would like to say a HUGE thank you to the wonderful Malcolm at Two Peas in a Pod, Barnes, for providing all the fruit for our wedding feast.  It was extremely kind of him, very much appreciated – and, of course, delicious!